A participant in the Amazon affiliate program is TopVehicleParts. We may obtain an affiliate commission if you buy from our selected links. The original price of the product will remain same. Learn more. Also you can check our EAT disclaimer. 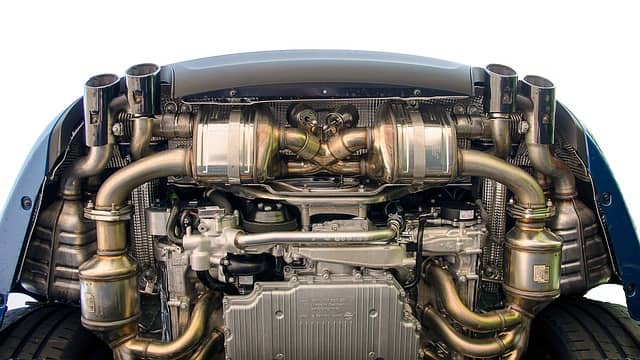 First of all, what are catalytic converters? It is a device that controls poisonous gases and other pollutants in its internal combustion engine. And reduces them to a great extent from the exhaust system They are, without a doubt, an environmentally friendly object. Moreover, it removes harmful gases from the vehicle exhaust. So, they are playing an important role to save our earth from pollution. Most importantly, the noxious gases are converted into non-toxic gases, such as carbon monoxide to carbon dioxide. Therefore, you should also know what are the symptoms of a bad catalytic converter.

Some of the bad catalytic converter signs are listed below.

Now let’s explain each of the points. The laggy engine performance is due to the catalytic converter. The converter is not allowing the smoke to exit smoothly out of the exhaust. Thus, it gets clogged.

The lower acceleration rate is due to the engine requiring more power to output the smoke of the internal combustion chamber than usual.

The most important condition is the contamination of the internal honeycomb design. This will lead to a stop in the function of the converter itself. Moreover, unburnt fuel sometimes might clog the catalytic converter leading to overheating.

Furthermore, that leads to the melting of the honeycomb design clogging the converter even more. Sometimes unburnt fuel goes directly to the exhaust system and causes malfunctioning.

It happens that oxygen sensors are not working properly and it sends wrong information of exhaust engine. This creates a fuel problem in the engine. It is one of the reasons for going bad.

Please take note that before you replace the catalytic converter, you should know the reasons why it got damaged. Otherwise, you will end up making the same mistake again and again.

How to fix catalytic converter without replacing?

In this section, you will learn how to fix a bad catalytic converter without replacing it.

Today’s vehicles are the most technologically advanced vehicles. An effective method is the Italian Tune-Up method. Some drivers never press their accelerator paddle that hard. For which the car’s converter never heats up to work properly.

What you will do In this step is run the vehicle harder than what you usually run for a few miles. This means you have to apply multiple vigorous hard accelerations. This will eventually heat up the converter properly.

You can also try and repair the exhaust leaks if your car has one. In addition, you need to do a careful leak search in order to find the leakage. So, this might be an effective solution besides the Italian Tune-Up.

There are some negative effects of the catalytic converter. We all know it saves the environment but it also compels us to sacrifice many things.

Catalytic converters indeed restrict the flow of gases from the exhaust. Certainly, this ultimately affects the fuel economy of the vehicle.

A study may surprise you that a 1999 Honda Civic test showed that the removal of the catalytic converter improved the fuel economy by 3%. Moreover, there was also a bump in horsepower along with additional torque.

However, the removal of the catalytic converter is illegal in the USA. So don’t attempt to do it if you’re in the region. There are regulations to keep them in your vehicle.

Moreover, catalytic converters are not capable of warming up. Hence for a few minutes after the vehicle starts, the converter doesn’t work. Further, they can cause a misfire. Sometimes they get clogged. As a result, it prevents the free flow of the engine and may cause a misfire.

Although they are good for the environment, a study shows it causes 10% more carbon dioxide emissions. Further, it releases nitrous oxide which is one of the reasons for global warming.

O2 sensor or oxygen sensor is an integral part of a catalytic convertor. It measures the oxygen level in the exhaust system. It informs the engine to adjust the amount of fuel in the combustion chamber. We must check bad O2 sensor symptoms as much as we keep our eyes on bad catalytic converter symptoms.

These are common symptoms:

Most importantly, you have to take precautions to fix this problem. You need to regularly clean it very well with a wire brush. In that way, you can make health good for a long period. If you sense that there is a problem call a local technician who can replace them. It is the best solution.

Follow this link on how to clean an O2 sensor.

You know, by now, the symptoms of a bad catalytic converter. Additionally, when you observe the symptoms then you should be alert that it is the right time to change your converter.

Moreover, you should change the converter if you see any distinguishing problems. This will help reduce the pollution caused by vehicles as the Internal Combustion engines emit harmful gases

Although catalytic converters hamper the vehicle’s performance, not they also help in saving our environment. It remarkably reduces air pollution to a great extent. Anyways, Good Luck!